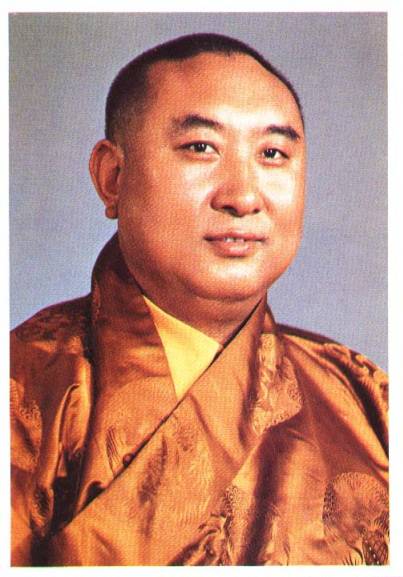 Choekyi Gyaltsen, the 10th Panchen Lama was born in Amdo, Eastern Tibet, in 1938. He was recognised as the Panchen’s reincarnation by Alak Lakho Rinpoche, and in 1951 was confirmed by the 14th Dalai Lama as the 10th Panchen Rinpoche. He met the Dalai Lama in Lhasa in 1952, and then took up his seat in Tashi Lhunpo Monastery in Shigatse.

Whilst maintaining good relations with the Chinese, the Panchen Lama was skilful in promoting the welfare of the Tibetan people. Realising that the Communist Chinese were developing a strategy which would destroy Tibetan culture, denying their stated fundamental policies of no racial discrimination and the freedom to practice religion, he submitted a 70,000 character petition demanding that the Chinese Government investigate the policy.

The Chinese Government accused the Panchen Lama of being anti-Chinese and of counter-revolutionary activities. In 1964, at a public meeting in Lhasa, he was removed from all public positions of authority. He was openly criticised and humiliated, and later taken to China. In 1966, he was subjected to a series of ‘struggle sessions’ in the National Institute of Minorities in Beijing, and was imprisoned for nine years and eight months, being released in 1975.

In 1979, the Panchen Lama was appointed Deputy Chairman of the National Peoples Politics Consultative Committee and Deputy Chairman of the National Peoples Congress. He travelled widely in the Tibetan regions of Amdo and Kham. His message urged Tibetans to maintain good relations with the Chinese. He also strongly advised them to keep alive the spirit to, “Be a Tibetan” and “Be for the Tibetan cause”. In 1985, in the Monlam Festival after the Tibetan New Year in Lhasa, the Panchen Lama said, “His Holiness the Dalai Lama and I are spiritual friends. There are no differences between His Holiness the Dalai Lama and me. Some people are trying to create discord between us. This will not succeed.”

From his earliest years, the 10th Panchen Lama was brought up under the supervision of the Communist Chinese, and had little opportunity to follow the traditional education of his predecessors. However, he developed within him a strong faith in the Buddhist doctrine, and an allegiance to the Tibetan cause. Since his death, he has been remembered as one of the most misunderstood Lamas in Tibet’s history, and one of the most courageous critics of Mao’s regime. 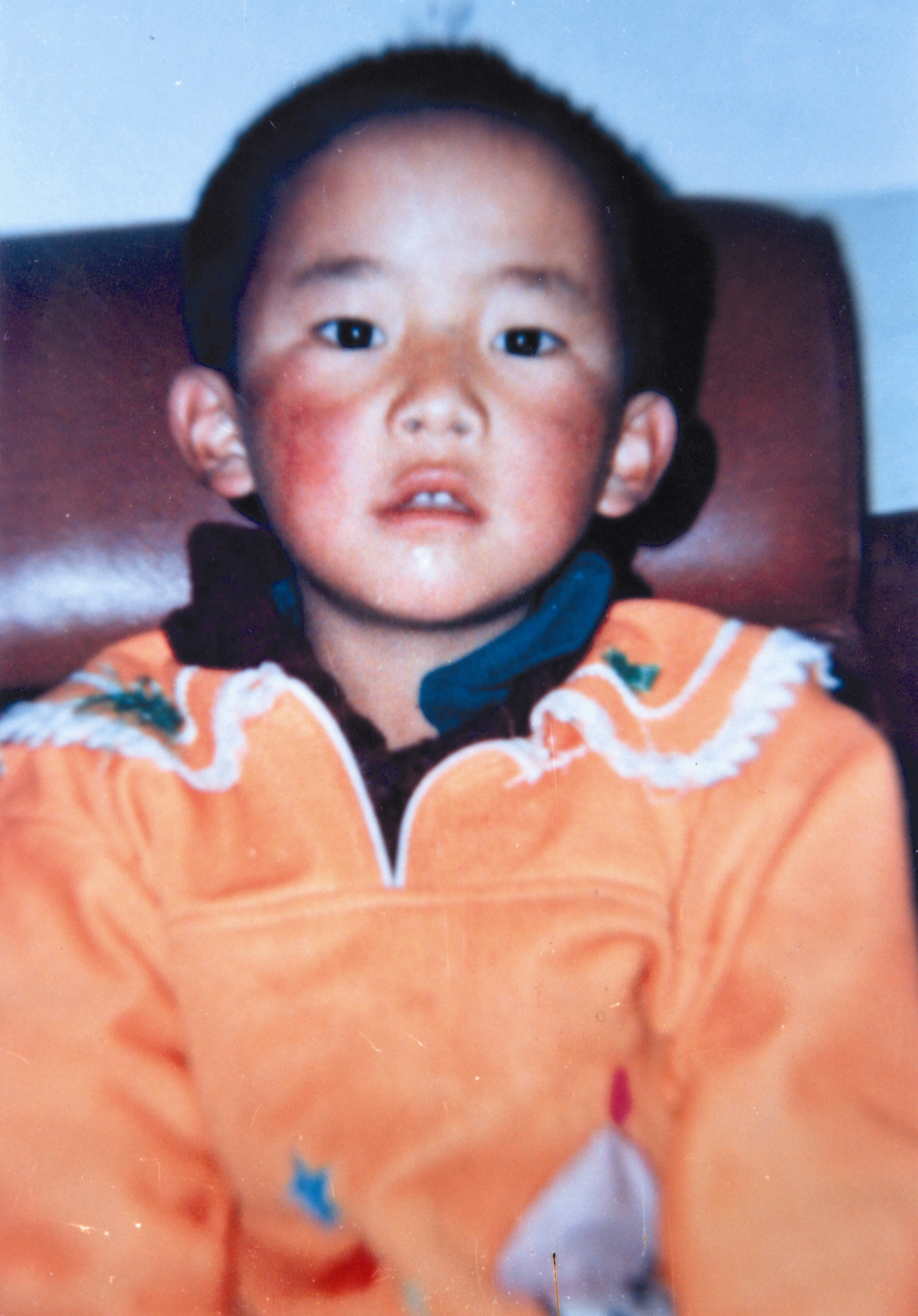 When the Tibetan Administration learned of His Holiness the 10th Panchen Lama’s death, the search for his reincarnation began immediately. Thirty names of possible candidates were received from both within and outside Tibet. In March 1991, it was confirmed that the Panchen Lama’s reincarnation had been born in Tibet.

The 14th Dalai Lama in exile in India repeatedly contacted the Chinese authorities asking to be allowed to play a part in the search for the reincarnation.  He wrote to Jiang Zemin in 1995, "I have a responsibility to honour and uphold the unique historical relationship between the Dalai lama and the Panchen Lama.  For example, in my own case, I am personally greatly indebted to the 9th Panchen Lama, who took a special interest and responsibility in the search for the reincarnation of the 13th Dalai Lama."  All his requests were refused.

By December 1994 the signs were clear that it was time to finalise the recognition process and in January 1995 it was revealed that Gedhun Choekyi Nyima, son of Konchok Phuntsok and Dechen Choedon of Lhari District in Nagchu, north of Lhasa, was the most likely candidate. On 14th May 1995, His Holiness the Dalai Lama officially proclaimed the six year old Gedun Choekyi Nyima as the reincarnation of the 10th Panchen Lama, the second highest spiritual leader of Tibet, giving him the name of Tenzin Gedun Yeshe Thrinlay Phuntsok Pal Sangpo.

Within days of the announcement, the six year old boy and his parents disappeared from their home, reportedly taken into Chinese police custody. It was not until 28th May 1996 that the Chinese authorities admitted that they were indeed holding the young boy and his parents, saying that “He has been put under the protection of the Government at the request of his parents.” According to Mr Wu Jianmin, the PRCs Permanent Representative to the United Nations in Geneva, “The boy was at risk of being kidnapped by separatists and his security had been threatened.” Since then he has been held in conditions of complete secrecy, unable to receive religious instruction in Tashi Lhunpo monastery.

Denouncing His Holiness the Dalai Lama’s proclamation of the reincarnation of the Panchen Lama as illegitimate, on 29th November 1995 the Chinese authorities held a ceremony during which they drew lots from a golden urn to select their own Panchen Lama. Six year old Gyaltsen Norbu was selected, and subsequently enthroned on 8th December 1995.

Shortly after His Holiness the Dalai Lama’s announcement, Chinese military forces arrested a number of monks, including Chadrel Rinpoche, Abbot of Tashi Lhunpo Monastery in Tibet. Chadrel Rinpoche had been appointed head of China’s search committee for the reincarnation of the 10th Panchen Lama in August 1989. However, he had angered the Chinese authorities by rejecting their plan to select their own Panchen Lama, and by supporting His Holiness the Dalai Lama’s candidate.

Sentenced to six years imprisonment and three years deprivation of political rights for “plotting to split the motherland” and “leaking state secrets”, Chadrel Rinpoche is being held in the top secret Chuandong No 3 prison in Eastern Sichuan.

Other monks who have protested against the Chinese authorities’ actions have also been imprisoned, (more than 80 people in all) and the administration of Tashi Lhunpo Monastery is now controlled by the Shigatse Religious Department, who appoint the management committee with approval of the Chinese authorities in Shigatse. A nine-member “work team” is resident in the monastery. They hold education sessions twice a week, during which the monks are ordered to oppose the Dalai Lama and His chosen reincarnation.

The whereabouts of Gedun Choekyi Nyima and his family remain unknown.